One of Spectra's employees recently drove a tractor to raise money for a long-standing charity that supports Cancer Research UK.

In its 16th year, the Pink Ladies Tractor Road Run sees over a hundred ladies taking to the roads of South Norfolk on brightly coloured vehicles to raise money and awareness for breast cancer research.

One of the 118 participants on the day was Spectra’s Quality Control Supervisor Tracy Cliff, who dedicated her run to a close friend who sadly lost her battle with breast cancer. Tracy commented,

“Unfortunately, directly or indirectly, cancer affects most people’s lives. For me personally. the opportunity to honour my dear friend Jo’s memory and raise money was something I really wanted to do. I was hugely disappointed not to have been able to take part last year because of a last minute mechanical breakdown. However, the chance to join so many people this year was an incredibly overwhelming experience”.

Setting off from Thorpe Abbotts airfield, scores of pink tractors paraded through the streets of Harleston and the surrounding Norfolk and Suffolk countryside, before breaking for a well-deserved lunchtime picnic at Gawdy Hall meadow in Redenhall. The parade then continued through Pulham St Mary, Rushall and Langmere Green before returning to Thorpe Abbotts nearly nine hours later.

With almost 140 women diagnosed every day, breast cancer is now the most common cancer in the UK. Although rarer, around 350 men are also diagnosed with breast cancer every year. Thankfully, more than two-thirds of women now survive 20 years or more, and Cancer Research UK continues to seek new ways to diagnose and treat the disease.

The annual event initially started out as a spur of the moment suggestion for a low-key retirement project. However, the Pink Ladies Tractor Road Run has since grown to become a hugely popular event, raising thousands of pounds and inspiring more and more women to take part.

Indeed, the annual tractor runs have raised £640,000 so far, with a target of topping £1 million by the time the 20th event is staged.

With her initial target comfortably exceeded, Tracy has so far raised over £600 on her Just Giving page, with Spectra Packaging contributing a further £100 in support.

Tracy went on to say,

“The support I have had from friends, family and work colleagues has been superb. That said, we want to raise as much money as possible and welcome donations, however large or small, to help us get closer to that magic target”.

Annie Chapman, organiser of the event, and proud recipient of a British Empire Medal for services to charity, has devoted a significant part of her life to the event, taking up much of her year. With husband John, Annie also runs the David Brown Tractor Club, owning 15 vintage tractors as well as six combines.

The original idea for the Pink Ladies Tractor Road Run was for women to get behind the wheel for charity, with the first pink parade taking place in 2004 with 50 ladies getting involved.

With participants travelling from as far afield as Lancashire, Dorset, Hampshire, Birmingham, Scotland and beyond, some of the women who take part are also breast cancer survivors with first hand experience of the disease.

Sadly, one lady who had made the run on several occasions saw her breast cancer return, passing away shortly after. In her mother’s memory, the women’s 21-year-old daughter brought her mother’s tractor to the event six weeks after her mother’s death and completed the run. 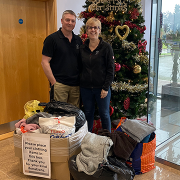 Spectra staff provide the gift of warmth at Christmas 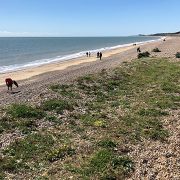 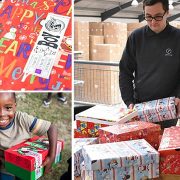